In 1985, Lukacs graduated from the Emily Carr Institute of Art and Design in Vancouver, British Columbia. He moved to Berlin in 1986, working at the Künstlerhaus Bethanien Berlin. In 1996, he relocated to New York City in order to be closer to the center of American art.

Although Lukacs is best known for paintings that depict exaggerated masculine figures, such as gay skinheads and military cadets (Military Series True North), he has also created a collection of paintings of flowers (Flowers) and trees (Arbor Vitae).His brutally explicit references to homo-erotic sexuality often shocked galleries and the public. His paintings frequently reference the historical compositions and themes of David and Caravaggio as well as the compositional devices of the miniature painters and illustrators of India (Of Monkeys and Men) and the Middle East. A more recent series of paintings depict conifer trees, dramatically painted in tar on a silver leaf field. The artist now lives in Vancouver, British Columbia, Canada. 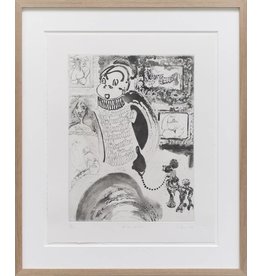