The year 1889 was marked by his first personal exhibition of posters, pastels , gouaches, the theater La Potinière in Paris. He won the gold medal at the World Expo . In 1890 , a knight of the Legion of Honour , he began his activity as a painter. He also met the collector Joseph Vitta , who became his patron and which it yields arrays.

In 1895 , he began his decorative work by the execution of monumental decorations in private homes and public buildings in Evian , the villa's Pine Forest, belonging to Vitta baron; in Paris, the living room of the town hall ( 1896 - 1903 ) and the curtain of the theater of the Grevin museum , which represents Pierrot and Columbine singing and dancing, taking a joyous medley in the night sky of Paris; in Neuilly-sur-Seine , the decorations of the mansion of Maurice Fenaille ( 1901 ); to Nice , the prefecture of the party room ( 1906 ). 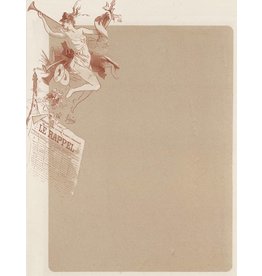