Suzanne Meunier is one of only two female artists creating etchings in the Boudoir style. It's unsurprisingly a male dominated genre, this is a very 19th century attitude when the men were free to study the female form whilst the ladies were left studying flowers. The two ladies currently on my list are Vala Moro and now Suzanne Meunier, both created original signed etchings of nude or partially dressed young ladies. Whilst Vala Moro's pictures were closer to the Icart style, Meunier's work tends toward the graphic Vargas "Pin Up" style.

Unlike the artist Paul Ordner, whose etching appear to have been created early in his career, Suzanne's etching seem to date from the later years, after she was already established as an artist illustrator. -- more of that later.
Suzanne was France and born towards the end of the 19th century - that is the start and end of the "facts" about her life, the rest is lost or has not been found yet. Even her dates are mysterious, the only dates I have seen are 1847-1954, which means she lived to 107 and that she created the etchings above when she was 88 years old !! these dates just do not feel correct - perhaps another S Meunier or maybe just wrong. 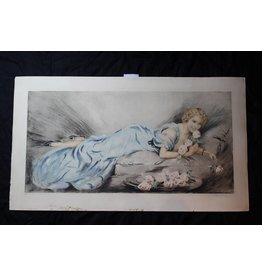